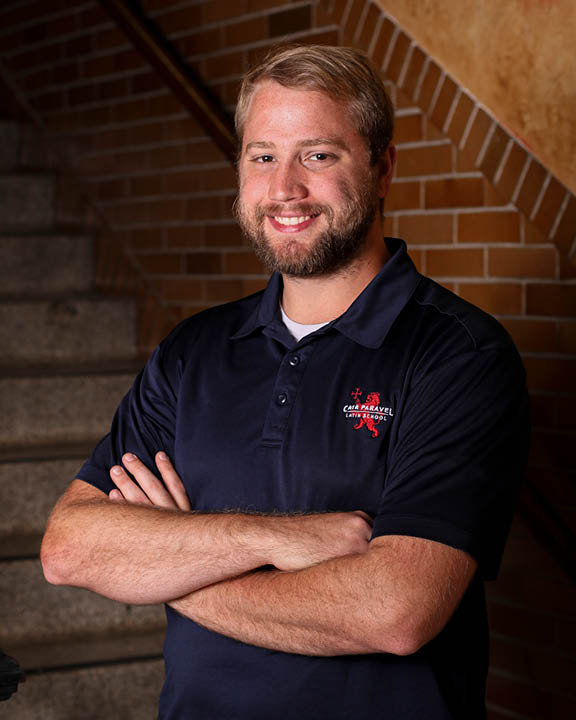 Why I Teach at CPLS: I teach at CPLS because, as an alumnus, I understand the worth of a classical, Christian education. The education I received at CPLS prepared me for more than just college, but life as a whole. Learning how to be a learner is the best result of a solid education and that is the mission of CPLS. I am blessed and humbled to be involved in that venture.

Personal Testimony: I was saved while a student in Mrs. Guenther’s Kindergarten class. As far as I can recall, we were talking about the Easter story and how Jesus died for our sins. I thought to myself, ‘Wow, that is so nice of Jesus to die for me.’ I had been taught that when someone does something nice for you, you do something nice back. And all Jesus wanted was for me to accept him into my heart! That is a nice thing to do; so, I prayed and accepted Jesus into my heart.

As I got older I began to realize more and more what it meant to accept Jesus into my heart and that it wasn’t some nice thing that I had done, but a chance that I only had because of something Jesus did. This became more and more apparent to me as I spent my summers working at Kansas Bible Camp. Working with younger kids and telling them about Jesus and what Jesus had done for them I realized that still thought of my relationship with the Lord in a ‘I am doing something’ sense. Like I was doing him a favor by being a Christian. This idea was shocked out of me one day when I was struck, almost out of the blue, about what the actual consequences of sin are. Not only was sin able to destroy me but destroy the world and the only thing that could prevent that destruction was Jesus’s sacrifice on the cross. There was nothing I could do to prevent my own destruction, it was only the grace and love and mercy of the Lord.

Since then, the Lord has continued to humble me; showing where I still do not rely on his power. Recently, the Lord has shown his mercy and love when my wife and I both were hospitalized in the space of a month due to health issues. The blessings poured out onto us during this time was so humbling. God is good and he loves his people. Praise him!

Back to Staff Directory